was a good neighbor 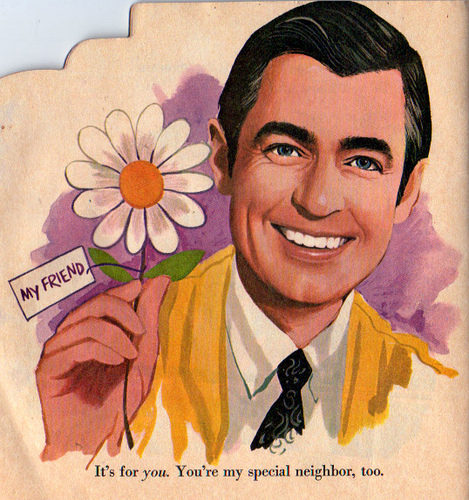 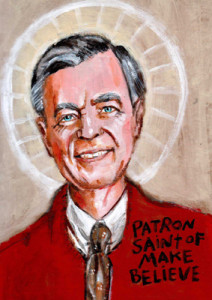 I came across this picture of the Sainted Mr Rogers and I thought… it was appropriate.

Mr. Rogers was a standard in many GenXer’s homes and in their hearts. I have fond memories from childhood watching this PBS television show.

Mr. Rogers Neighborhood ran for 4 decades and spoke to millions of viewers…

I’ve always wanted to have a neighbor just like you.

I’ve always wanted to live in a neighborhood with you.

So, let’s make the most of this beautiful day.

Please won’t you be my neighbor?

Mr. Rogers passed away in 2003 of stomach cancer…

But Fred McFeeley Rogers, an Ordained Minister in the Prebyterian Church…

Understood the Biblical ideal of a neighbor…

I grew up watching his show so it was a little strange to see him suddenly in the middle of my NewsFeed, over and over, smiling his smile and wearing one of his sweaters. But as soon as I saw what he was saying, I understood why there was this quotation:

“When I was a boy and I would see scary things on the news, my mother would say to me, ‘Look for the helpers. You will always find people who are helping.” 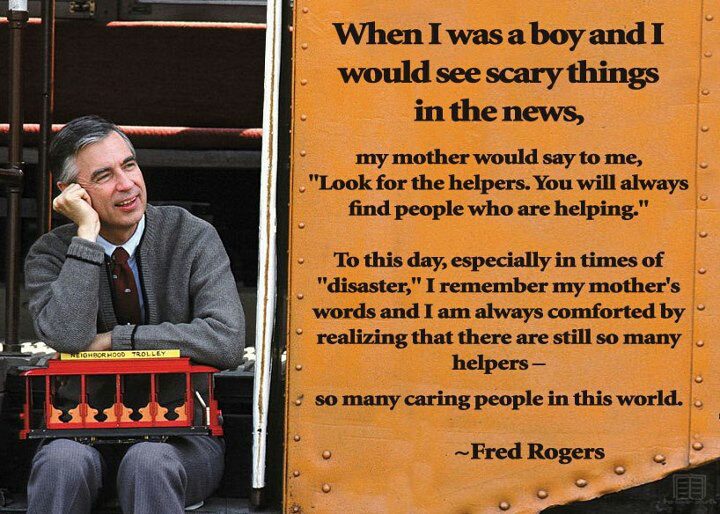 Classic Mr. Rogers: simple, kind and, if you’re a fool or just not paying attention, you might dismiss those words as sentimental without realizing just how powerful and important what he’s saying really is.

Now I like many have heard stories about Fred Rogers… that he was a sniper in vietnam and that the reason he wore long sleaved sweaters was because he was covering full sleeved tatoos arms… these are not true.  Aprentlly some people find it difficult to believe that Mr Rogers was just a nice guy, who wanted to teach children. (check out Snoops.com).

CONTEXT IS EVERYTHING: Mr Rogers Giving the Finger to Kids?
Watch the video and learn how.

So Rev Mr. Rogers was a Presbyterian minister, and he viewed his show and what it was doing as his ministry in the world. Mr. Rogers didn’t conduct his public ministry like a lot of religious leaders we see on TV. He wasn’t interested in getting people to claim a certain religious formula or accept a particular set of doctrines, and certainly not in trying to make decisions about who God should and should not love. Like Jesus, he was much more concerned with how we treat our neighbors.

When Jesus was asked what one has to do to have eternal life, he answered, “Love God with your whole heart, soul, mind, and strength; and love your neighbor as yourself.” Importantly, Jesus doesn’t offer a choice between the two; you can’t love God wholeheartedly without doing the same for your neighbor. When someone asks, “And who is my neighbor?”

Jesus responds with one of his most famous stories: the Good Samaritan, in which a man is mugged on the road and left for dead.  Several of his own people pass him by on that dangerous road, but a Samaritan man, who would normally be considered an enemy, actually stops, tends to his wounds, takes him to safety at an inn, and tells the innkeeper that he’ll pay whatever expenses the man incurs until he’s well. When he finished, Jesus asked the questioner one of his own: “Which of the people on the road was a neighbor to the man who was robbed?” Sheepishly, the questioner responds, “the one who showed mercy.” And Jesus responds, “Go and do likewise.” It’s not about figuring out who your neighbor is; it’s about figuring out how you can be a neighbor to others.

Every week at the start of his show, Mr. Rogers would sing, “It’s a wonderful day for a neighbor … won’t you be my neighbor?” It sounds simple and kind; and it is, but it is also powerful and important. He was really talking about being a neighbor the same way Jesus did.

He didn’t say, “It’s a beautiful day, let’s be nice to each other.” It is the ugliest days that are the most wonderful ones for being neighbors.

Becasuse being a neighbor isn’t about being nice. The way Mr. Rogers and Jesus mean it, it’s about going out of our way to help our neighbor when they need help, loving your neighbor even more than yourself sometimes as you put yourself at risk for their well-being.