The Jericho Road and the Samaritan 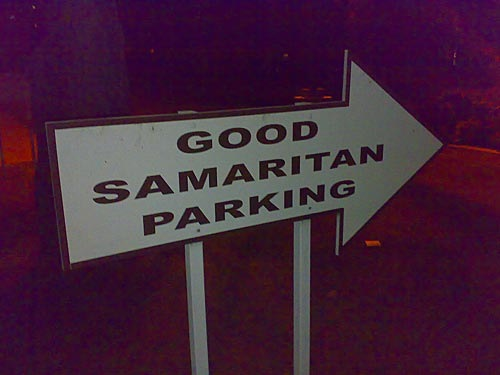 As I was doing research on the “Good Smaratian” Parable I came across a few that struck me:

Why aren’t we all Good Samaritans? Daniel Goleman on TED.com

Daniel Goleman, author of Emotional Intelligence, asks why we aren’t more compassionate more of the time. Through psychological experiments and a story of the Santa Cruz Strangler, he shows how we are all born with the capacity for empathy — but we sometimes choose to ignore it. (Recorded March 2007 in Monterey, California. Duration: 13:13.)

Won’t You Be My Neighbor

A religious scholar asked Jesus a question, to test his adherence to the law. “Teacher, what do I need to do to ensure I will live forever?”

Jesus answered his question with a question, “How do you interpret the scriptures?”

The scholar, taken back that now he was on the hot seat, took a moment before answering, “That you love the Lord your God with all your passion, that you pray, that you serve God with your whole life—and that you love your neighbor as much as you do yourself.”

“Great answer!” said Jesus. “Do it and you will live.”

Not satisfied, and still looking for an argument, the scholar asked, “Well then, how would you define ‘neighbor’?”

Jesus answered by launching into a story.

“There was once a man traveling to New York City to visit the site where his brother was killed in a terrorist attack. He was looking for a way to deal with his emotions and find some healing. As he walked to the memorial he was accosted by a Christian man who assumed he was a Muslim because of the taqiyah on his head. “You have no right to be here!” he yelled at him.

The man stuttered in broken English, “I’ve come to pay my respects and pray.”

The sojourner walked on, head bowed. He hoped the next person he met would be more receptive to his visit. It wasn’t the case. As the Jewish Rabbi saw him coming down the street he jay-walked to the other side so he wouldn’t come face to face with the Arab man.

He rounded the corner, coming closer to the memorial, and was very nearly in tears. He surprisingly found himself at the door of a mosque. He went in and found the Imam who listened to his story. He confessed to the Imam that it was one of his brothers who had become a terrorist and had hijacked one of the airplanes that crashed into the towers. Though some in his religion thought he should be proud of his brother’s ‘sacrifice’, in his heart, he felt only shame. The Imam led him in prayers and then walked him to the site where he could mourn the loss of his brother along with the men and women who perished in the towers. He then took the traveler back to the mosque and talked to him of living a life of radical peace and prepared to send him home.”

Jesus then asked the religious scholar, “Whose actions towards this stranger were the more God-like? Which man would you truly want as your neighbor?”

The scholar kicked at the dirt, not wanting to answer. He was more than a little offended. “The Muslim Imam,” he mumbled under his breath.

Jesus last words to him were, “Then maybe you should try living like him.”

[Scene: Gainesville, Georgia, in the mid-1950’s. Southern-style racial injustice is in full bloom. Jesus is preaching to a group that ranges from businessmen on their lunch break to prostitutes, derelicts, white trash, and Negroes. Some of the local sheriffs and ministers have gathered to see if they can make Jesus look bad, maybe even catch him “inciting a riot” so they can throw him in jail.]

One of the ministers said, “Preacher, tell us again what we have to do to go to heaven.” Jesus replied, “You’re a minister. What do you say?”

The minister immediately went on autopilot: “The Good Book makes that perfectly clear: ‘Thou shalt love the Lord thy God with all thy heart, and with all thy soul, and with all thy mind, and love thy neighbor as thyself.'” Said Jesus: “You have correctly stated what God requires of you, sir; do that and I assure you that you will go to heaven.”

“And,” said the minister, with mock sincerity, “exactly who is my neighbor?”

“Let me tell you a story,” said Jesus. “Once there was a traveling salesman. One day, when he was headed for Dalton, he was jumped by a gang of thugs. They beat him half-way to death, took his money and car, and left him to die along the side of the road. Soon, a prominent businessman drove up, realized that he had stumbled along the scene of a crime, got real scared, and sped away. Then a minister came by, pushed the unconscious salesman with his foot, muttered something about ‘this sinful world,’ and he drove away too. Later on, an old Negro man, a junk collector, came by. He listened for the salesman’s breath, realized he was still alive, and put him in his truck to drive him back to Gainesville. At the first hotel, he got the man a room, stayed with him for a day, and shared his food with him. He paid the hotel clerk all the money he had, and promised to come back after he sold his junk to take care of any extra charges.”

“Now, you tell me,” said Jesus, “which one was that man’s neighbor?” There was a palpable silence in the air as Jesus and the minister stared at each other.

“I guess it was that nigger,” the minister reluctantly acknowledged.

“Then,” Jesus replied, “why don’t you go, and act the way you know you should.”

* The word “nigger” used above is, obviously, a hateful term that has been properly banished from the English language. It is used here, though, as you will see from reading the parable, because when Jesus told the parable of the “good Samaritan,” the Samaritans were a despised racial minority and the word “Samaritan” was the same kind of slur as the word “nigger.”

Jesus said, “A certain single mother was going down from East St. Louis to Belleville; and she fell to a pre-existing condition and the high cost of health care, and insurance companies stripped her and denied her treatment and went off leaving her half dead.

“And by chance a certain pastor of a fundamentalist baptist church was going down on the road, and when he saw her, he passed by on the other side.

“And likewise a member of the congregation also, when he came to the place and saw her, passed by on the other side.

“But then a fag, who was on a journey, came upon her, and when he saw her, he felt compassion, and came to her, and acquired for her proper medication, pouring sunshine and rainbows on her, and he put her in his own car, and brought her to a clinic, and took care of her.

“And on the next day he took out two hundred dollars and gave them to the doctor and said, ‘Take care of her, and whatever more you spend, when I return, I will repay you.’

“Which of these three do you think proved to be a neighbor to the mother who fell to the greed of insurance companies and fear-mongering of religious conservatives?”

And the Muslim he was teaching said, “The one who showed mercy toward her. Praise Allah.” And Jesus said to him, “Go and do the same.”

A  lawyer walks downtown to go to court and sees on her right a man, who had been robbed, stripped, and beaten.  But she was on her way to court, needing to review her case before the trial so she hurried on by.  The same day a young priest, who had had a busy day and was running late to morning mass, came across the same man, beaten, stripped, and robbed.  Nevertheless, the priest was still young and had not shown the fathers of the church that he was responsible enough to lead the morning mass; so he felt regret but kept walking, making it just in time.

About twenty minutes later a religious education director walked down the street, seeing the broken man who was lying on the ground.  The religious education director crossed to the other side of the street (out of sight out of mind).  Then came a secular humanist and saw the man that had been robbed, stripped, and beaten.  The secular humanist helped the broken man up and carried him to the nearest motel, got a room and tried to clean and bandage his wounds.

[Note:] I’m not sure if a secular humanist is a good parallel but I think the point is that the Samaritan was someone that many religious persons would least expect compassion it from.